Red post boxes can be seen all around London and the rest of the UK. The most common post box seen in London is the red Pillar Box which is one of the most familiar items of British street furniture. Its inventor was the multi-talented English novelist Anthony Trollope, who worked for the postal service in both Britain and Ireland for over 30 years.

Post box always bear the monogram of the reigning monarch, and some of the most iconic examples of this particular icon are those that show the initials V.R., for Queen Victoria, making them over a century old. They bear the initials of the monarch who was on the throne when that particular box was built. It is made up of the Christian name of the King or Queen together with the letter R which stands for Regina or Rex.

The vast majority of boxes around London are engraved with EIIR, as Elizabeth has been on the throne for such a very long time. Others are engraved GR after George V. 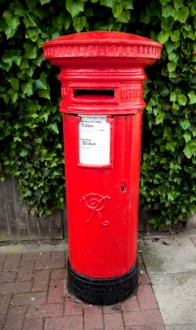 VR would be the oldest, but as the post boxes were introduced in 1853 and Victoria carried on ruling for nearly 50 years after that, it wouldn’t be so rare. A post box engraved with EVIIIR for Edward VIII might be the rarest.

Next time you go for a walk down your street, notice the red pillar boxes, they can tell you more than you realized about the history of a neighborhood!

Have you considered purchasing personal mail boxes? Have your post delivered to a secure post box, which can be mounted to your fence or on a wall.