Personal theft is an issue in any public place. Despite robbery being down in general in 2014 personal theft had a slight increase of 7%. Children in particular can be easy targets as they might be less aware of the risks they are taking with expensive items.

We investigate the cost of the items children risk losing by taking them to school, and look at ways to protect them from theft in the future. 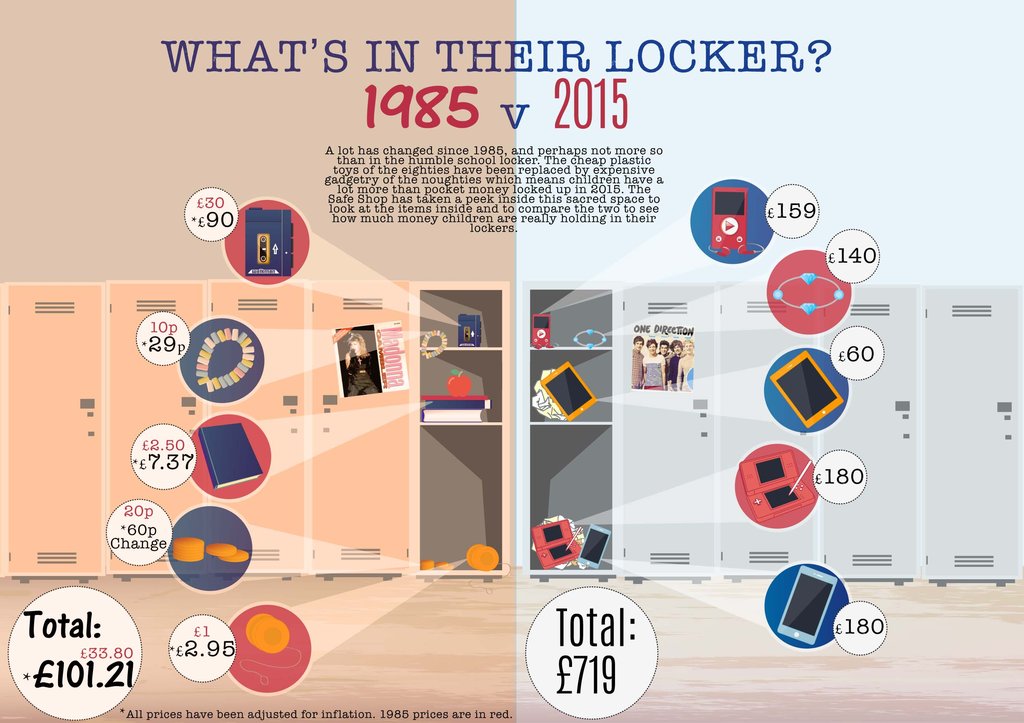 Prices adjusted using This is Money’s inflation calculator. All 1985 prices based on estimates and first hand testimony.

Comparing modern day items with those that would have been familiar to kids 30 years ago really highlights how much more money children are carrying round today. This becomes obvious when we look at the totals above  In just 30 years, the differences in technology have meant even with prices adjusted for inflation the ‘locker total’ for the type of items children may be carrying to school has changed drastically.

A school should be a place where children feel safe and largely they do, but that doesn’t mean there isn’t the risk of theft. This may have been less of an issue thirty years ago when most children only carried their lunch money and a yo-yo to school, but now that around half of UK children under ten own a mobile phone and a staggering 95% of teenagers have one, it has become more of a serious issue. With the average cost of a mobile phone still around £200, this can be a very costly crime.

In London alone last year 314 mobile phones a day were stolen while an estimated 300,000 are reported each year nationally. Whether in school or out, mobile phone theft is probably the biggest risk children face.

We’ve used information from the Metropolitan Police and the Safe Shop team to help give tips on how children can keep their mobile phones safe:

It’s not just smart phones either, mp3 players, jewellery and designer clothing can all make an unsuspecting person the victim of a crime. When you add the value of these items to the cost of a mobile phone, the total begins to grow. Below are more tips on keeping your possessions safe:

One of the ways schools help to protect their pupils’ belongings is by offering locker facilities. Anthony Neary, resident security expert at The Safe Shop expressed just how important a good quality padlock can be with a locker.

“Schools should all provide lockers to facilitate students to help keep their belongings safe, especially as many students carry valuable items today. Just as important as the lockers though are the locks, which are often inadequate and easy to break.”

“Schools can solve this problem by encouraging students to buy good quality padlocks or using more modern combination lockers  that can only be accessed with a unique code.”

With more children cycling to school now there’s also the bicycle to think of. Many schools provide facilities such as bike racks, to lock up your bike. However, schools can only do so much and it’s important that from a young age, children and their parents take precautions on security. The Met recommend that you security mark valuable items so that they can be identified in case of theft. They also have some great advice on what to do if your child becomes a victim of crime while at school on their website.

Not all children will be carrying £719 in their bags or lockers at any given time. Many children though may be carrying a mobile phone one day, an e-reader the next and the potential financial loss of those items probably isn’t something parents often think about. That’s why its important children are aware of the value of these items and how to protect them.

Are your children’s ‘toys’ more expensive than yours were as a child and are you surprised by our totals? Does your child know how to keep them safe?  Let us know in the comments below!

What’s In Their Locker? by MatthewDecember 22, 2014Just for Fun, Misc, News, On The Move0 comments